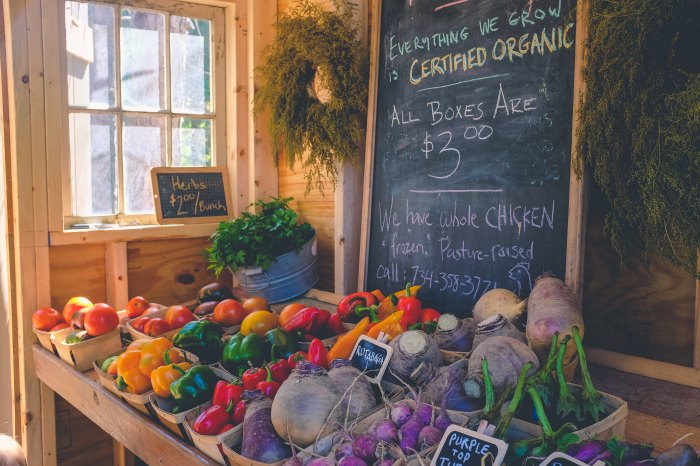 “GOING LOCAL DOES NOT MEAN WALLING OFF THE OUTSIDE WORLD. IT MEANS NURTURING LOCALLY OWNED BUSINESSES WHICH USE LOCAL RESOURCES SUSTAINABLY, EMPLOY LOCAL WORKERS AT DECENT WAGES AND SERVE PRIMARILY LOCAL CONSUMERS. IT MEANS BECOMING MORE SELF-SUFFICIENT AND LESS DEPENDENT ON IMPORTS. CONTROL MOVES FROM THE BOARDROOMS OF DISTANT CORPORATIONS AND BACK INTO THE COMMUNITY WHERE IT BELONGS.” – MICHAEL H. SHUMAN – AUTHOR OF GOING LOCAL

Voting with your dollars is what this is all about. By investing them in your local community you are voting for independent business, job creation, a higher standard of food and so much more. Plus, supporting local business owners is an easy way to reinvigorate the economy. While the reasons to buy local are numerous, here are four we think top the list.

Small local business are the largest employers in the country: responsible for two out of every three new jobs. By supporting local businesses, you are supporting more stable and opportunity-rich employment in your community. Buying local also increases community wealth. A study found that for every $100 dollars spent at a local business, $68 remained in the city compared to only $43 of every $100 at a chain retailer.

LOCAL PRODUCTS ARE BETTER FOR THE ENVIRONMENT

On average, food in the U.S. travels 1,500 miles before it gets to your plate. This idea has been coined “food miles” or the distance your food travels from its origin to the store where you buy it. Food miles are among the fastest-growing sources of greenhouse gasesin the world: almost 250,000 tons of global warming gases have been attributed to the import of food products. That’s equal to the pollution of more than 40,000 cars on the road. So the less your food has to travel, the better it is for our air quality. Plus, a well-managed farm conserves fertile soil, protects water sources and takes out carbon from the atmosphere.

LOCAL FOOD IS BETTER FOR YOU

According to the Cambridge Journal of Regions, Economy, and Society, counties with a higher volume of local businesses had a lower rate of mortality, obesity, and diabetes. That’s because eating foods free of untainted pesticides like organic fruits and vegetables, grass-fed meats, and pasture-raised eggs and dairy is a major upgrade from the Standard American Diet. Not only is local produce often free of the harmful pesticides and chemical fertilizing used in mass farming, food grown locally is also more nutrient dense. Since the time between farm and table is shorter, fewer nutrients are lost compared to food that had to travel a long distance to get to you. Imported food is also picked earlier so it will keep longer. This means it doesn’t have as much time to ripen on the vine and absorb vital nutrients as locally grown food does. Eating local also means eating seasonally. Thanks to mass farming practices, foods that aren’t in season are now available year-round at the grocery store. But it’s not natural to eat a peach in the middle of winter. In fact, a study in Japan found a threefold difference in the vitamin C levels in spinach grown in the summer as opposed to the winter. Seasonally grown food also helps turn over the soil and replenish vital nutrients for absorption by future crops. Fruits and vegetables that are grown in their native soils are rich in probiotics – they haven’t been scrubbed and sanitized to kill all the soil based organisms which support a healthy gut and immune response.

Studies have shown that farms contribute more in taxes than they require in services. On average, for every $1 in revenue from residential development, the government spends $1.17 on services, which requires higher taxes. For each dollar of revenue raised by farm, forest, or open space, governments spend 34 cents on services. That means not only are you getting more nutritious food, it’s actually saving the whole community money in the long run.

View all posts by Alex Dalby